Over the past few days, I’ve been struggling to make some very important decisions about the direction of my coaching and training business. My mind is telling me one thing, my heart is telling me another, and my gut is telling me to avoid making any decisions at all. I’ve felt quite split and frustrated actually.

Has this ever happened to you?

What I find ironic, is that I know I should be listening to my ‘heart’ – after all, I’m supposed to be a heart intelligence expert right?  But being a heart intelligence coach doesn’t exempt me from being human and experiencing the effects of a speaking mind, a feeling heart, and a growling gut.

When I started doing this work, my tendency was to only listen to my heart, disregarding some very valuable information that was coming from my mind, and my gut. The results were often catastrophic. Like the time I thought I was following my heart by pursuing someone who was married and ended up in what I can only remember as a big mess.

A true ‘heart based’ decision, I’ve now learned, is one that involves integrating the information coming from your heart, mind, and gut. This is embodied Heart Intelligence truly is. How do you do this?

In the book “Courage” by Osho, he tells the story that captures the essence of this process, which he describes as ‘the key to mastery’. Here’s the story:

Two beggars used to live outside a village.  One was blind and one had no legs.  They were competitors of course–in the same profession, begging from the same people–and they were continually angry with each other.  They were enemies, not friends. One day the forest near the village, where these beggars used to live, caught fire. The man without legs could not get out; it was impossible for him to cross the forest–it was all on fire. He could have moved a little bit but that would not help.  An exit, and a very quick exit, was needed.  The blind man also was certain that he could not get out.  He did not know where the fire was, where the road was, and where the trees were burning and where they were not.  A blind man….he would get lost. So when the forest was on fire those two beggars thought for a moment.  They were enemies, not even on speaking terms, but this was an emergency.  The blind man said to the man who had no legs, “Now the only way to escape is that you sit on my shoulders; use my legs and I will use your eyes.  That’s the only way we can save ourselves.”  It was immediately understood.  There was no problem. But both were intelligent people; they dropped their enmity, became friends, and saved their lives.”

You are on fire. You’re burning with desire, sometimes in anguish, over something you deeply want.  Perhaps it’s an important decision you know you must make. And you feel it as a burning sensation in your gut!

Alone your intellect is blind and cannot choose the direction in which to go. Most of the information you have is based on what you have experienced in the past, or believe is possible, yet you’re blind to new possibilities that could be available to you.

There is a heart within you, which sees and feels, but which has no legs. Within you, there’s a beating heart, waiting for your intellect to use the heart’s vision to see and feel what the intellect cannot perceive.

Both your heart and your intellect can come out of the fire, but the intellect has to accept the heart above its shoulders.

What Osho is really saying here is that the intellect must become so humble, as to let the heart lead. And when this happens Osho tells us,

In the hands of the heart the intellect becomes intelligent.  It is a transformation, a total transformation of energy. Then the person does not become an intellectual, he simply becomes wise. Wisdom comes through the meeting of the heart and the intellect. And once you have learned the art of how to create a synchronicity between your heartbeats and the workings of your intellect, you have the whole secret in your hands, the master key to open all the mysteries.”

The Solution to a Mind and Heart in Conflict

So, if you find yourself in a situation where your mind is telling you one thing, your heart is telling another, and your gut is telling you to run away, take a moment and just connect with your heart. The heart is ALWAYS the boss, simply because it can see. And only those who can truly see, who can catch the highest vision, can lead.

Breath every thought into your heart, every fear, every feeling, and let your heart resolve the conflict of your mind and gut, and reveal to you the ultimate truth about the situation you’re in. Your heart always, always, always knows.

And when you act from that place of ‘knowing’ within your own heart, there’s a sense of peace and alignment with the present moment with what is, and what you’re deeply longing for. And from this place, the smallest action can often lead to the biggest result. 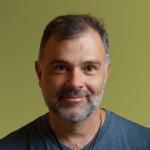